Cape Town – The crew of Andy Birkett and Nicky Notten pulled off a staggering victory at the Prescient Freedom Paddle surfski race around Robben Island on Freedom Day on Wednesday, upstaging defending champions Hank McGregor and Josh Fenn in a thrilling sprint to the finish.

The pair, who recently won the Fish River Canoe Marathon together, were central to a three boat break at the front of the race on almost flat seas off Cape Town with McGregor and Fenn and local brothers Dawid and Jasper Mocké .

“We had a really awesome race today,” said Birkett, who won the title in 2019 with Euro Steel team mate McGregor.

“Nicky was brilliant steering the boat today and it was a privilege to be paddling with him. I just try and keep quiet and do my thing in the back.

“It was a close race the whole way,” he added. “When we got to the island there were only two boats together – ourselves and Hank (McGregor) and Josh (Fenn). Dawid and Jasper (Mocké) caught back up to us as we went around the island.

“On the way back the pace started to heat up as we all tried to catch a few bumps, but those three boats stuck together until about two kilometres to go.

“I could see that Nicky was starting to make his move, testing out the other combinations and waiting for the right time to come past. 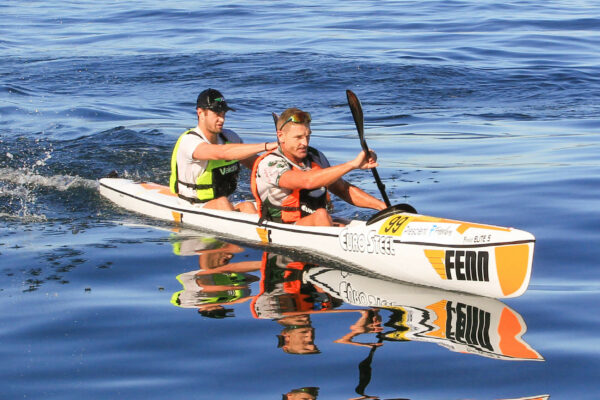 McGregor and Fenn were full value for their runners-up berth, while the tenacious Mocké siblings fought back into the race after dropping off the front bunch during the outward bound leg to Robben Island.

The victory secures the Canoeing South Africa double ski laurels for 2022 for East Londoner Birkett and Capetonian Notten to go with the national K2 crown they won at the Fish last year. 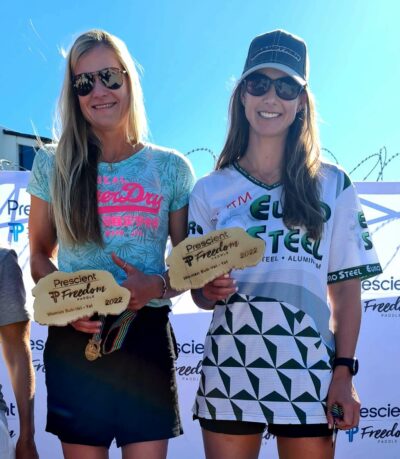 The women’s race was shaken by the late withdrawal of defending champion Candice Murray after she couldn’t bounce back from a dose of Covid-19 and her partner Kira Bester opted to paddle with Jade Wilson.The title went to the powerhouse crew of Olympic sprint medallist Bridgitte Hartley and Pippa McGregor with Bester and Wilson not far behind them, and Christie Mackenzie and Jordy Peek rounding out the women’s podium.

The race included a healthy field of athletes using surfskis, Stand Up Paddleboards and prone boards taking part in the short and medium course events along the Cape Town seaboard as the unique celebration of Freedom Day continues to attract more participants every year.

More information can be found at https://freedompaddle.co.za/